This could be the end of heel spurs, sciatic pain, supination and pronation

Align Footwear® visited Associate Professor Lars Dalhoff, who lectures in anatomy at the Physiotherapy School in Holstebro, Denmark. Lars Dalhoff has followed Align Footwear® insoles with great interest and has even tested them – on himself as well as on selected target groups in elite sports. His thoughts and assessment of the insoles are as follows:

“I am involved in the world of elite sports and I teach at VIA university in Holstebro. Anatomy is my main subject – so I’m interested in the insole as an aid in the sporting world.

When it comes to sport, foot position is crucial. Good contact with the underlay is important for the body’s alignment – well, that’s why they call these insoles Align Footwear! When I work with students, I always focus my examination and analysis on the knees and body trunk. These must be balanced. Then I look at the foot – this too must be balanced. Instability in one joint is sometimes caused by instability in another.

When we say “alignment”, we mean that the body is straight all the way, from top to toe. Many other insoles I know focus on the arch of the foot. If you have a tendency to excessive pronation or are flat-footed, you can insert a pad of some kind to compensate at the point on the foot, at which the problem is obvious. What is unique about Align Footwear® insoles is the direct contact to the big toe. The big toe is the most important part of our foot when it comes to contact with the ground and balance. Align Footwear® insoles affect the entire foot, rather than only supporting one end of the foot. Align Footwear® insoles affect both the heel and the forefoot. If the foot is balanced and corrected from the heel all the way out to the big toe, then it is highly probable that the feet and body are perfectly positioned.”

How do they actually work?

“According to Align Footwear®, the most important feature of the insoles is the world-patented Tri Planar Points. I believe that two things are even more important: the forefoot – which is essential for stability and good contact with the underlay – and heel support. Heel correction is essential as it creates a natural balance – we can call it alignment – throughout the rest of the body. If your ankle and your feet are balanced right, you rectify the position of the bones, calcaneus and talus (the talus is the bone at the back of the foot that connects the leg and the foot). Imagine that your heel bone drops slightly to one side. If the heel bone is crooked,  all the bones at the heel end of the foot are misaligned. Wearing Align Footwear® insoles shifts all the bones into a better position.

I always find it very exciting when something new is presented on the market of wellness and well-being, but this one is head and shoulders ahead of the field. It’s great to see Align Footwear® focusing on the whole foot rather than only on the arch (like all other insoles on the market do). Insoles are very often very expensive. I paid for a pair for my daughter. Specialist soles can be heated and moulded to the shape of your foot but they will cost you as much as £140 a pair and often need continuous adjustment. Align Footwear® insoles are relatively inexpensive and I believe that they will give support and help most people, not 100% of all human beings but still quite a lot…”

Align Footwear® insoles are moving towards doing something really positive for a great many people all over the world. Based on my experience and competences, I am convinced that these insoles could mean the end of heel spurs, sciatic pain, supination and pronation.

What disadvantages do you think the insoles from Align Footwear® might have?

Can they improve and optimise performance, e.g. in sports?

“Yes. If the body slopes to one side or the other, the knees, hips and even the shoulders are affected, Align Footwear® insoles will be important. By straightening the body and working with the biomechanical parts and reducing the risk of overloading through correction, the athlete is much likely to perform better. It’s all about getting the muscles to work equally on the interior and exterior sides of the bone – and the front and back too…

Can you optimise performance? Yes, because your body does not need to concentrate on taking care to avoid overstretching or strain.  If you are naturally balanced, you will find that you have much better control of your feet and body. If the body is aligned in the right position, the knee, hips and shoulders are also aligned. A straight posture is the healthiest and most natural position for the body and provides the best balance and prevents injuries due to excessive jumping, kicking and twisting.”

Align Footwear® insoles are unique because…

“There are many insoles available on the market and many of them focus on comfort and softness. Align Footwear® insoles are interesting because they have the three points (the Tri Planar Points technology) that support the heel. This is unprecedented. A unique approach. Most insoles focus on correction of the foot and provide arch support, often in the shape of a cushion under the arch. An Align Footwear® insole is a complete sole which does not not move around inside the shoe. A mobile support can cause irritation, blisters, and inadequate or unsuitable correction. With Align Footwear® insoles, you have firm ground under your foot plus good shock absorption and support.

Finally, I would like to add that it is a really great thing that Align Footwear® insoles are also available in children’s sizes. If you correct at an early stage, you can avoid much pain – e.g. in a weak forefoot. Early focus is important.”

Remember that we offer a 60-day money-back guarantee. If you do not find that Align Footwear® insoles have a positive effect, you can return them and we will refund your money. 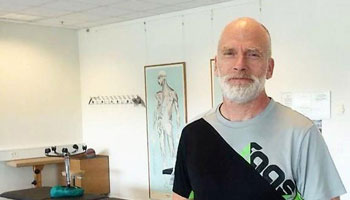